While some think of it as regular vaginal discharge, others understand that cervical mucus can be a practical indicator of female fertility. Especially when planning for a baby, it makes sense to take a closer look at the cervical mucus as it reveals when we are in our most fertile phase and chances for a baby are at an optimum!

What exactly is cervical mucus?

The cervix is the neck-like opening to the uterus, which opens and closes cyclically. In the overlying glands, cervical mucus of varying quality is produced, which gives information about whether we are in our fertile phase or not. Sometimes the cervical mucus is thick and impermeable and thus closes the cervix to protect us from germs. It also works to prevent sperm from entering, as the body is hormonally not yet ready for the ovum to get fertilized. On the other hand, when our body is ready for conception, the cervical mucus is more fluid and even sugary in order to protect, filter, nourish, and direct sperm.

How is the cervical mucus checked?

Understandably, this is not everybody’s ‘thing,’ but it's not nearly as uncomfortable as you may think. You do not necessarily have to put your fingers all the way up into your vaginal canal. The mucus located directly at the vaginal opening is sufficient to check its consistency. You simply take some mucus with the index finger (possibly together with the middle finger) and check, as shown in the graphs, if the mucus is rather creamy, watery or stretchy. You may have noticed that, in your most fertile phase, the toilet paper "slips" or more mucus residue remains after wiping - you can evaluate this mucus just the same way as described above.

How does cervical mucus change during the cycle?

Our graph shows the relationship between fertility, basal body temperature, hormones and the consistency of cervical mucus before ovulation (see blue bordered graphic). 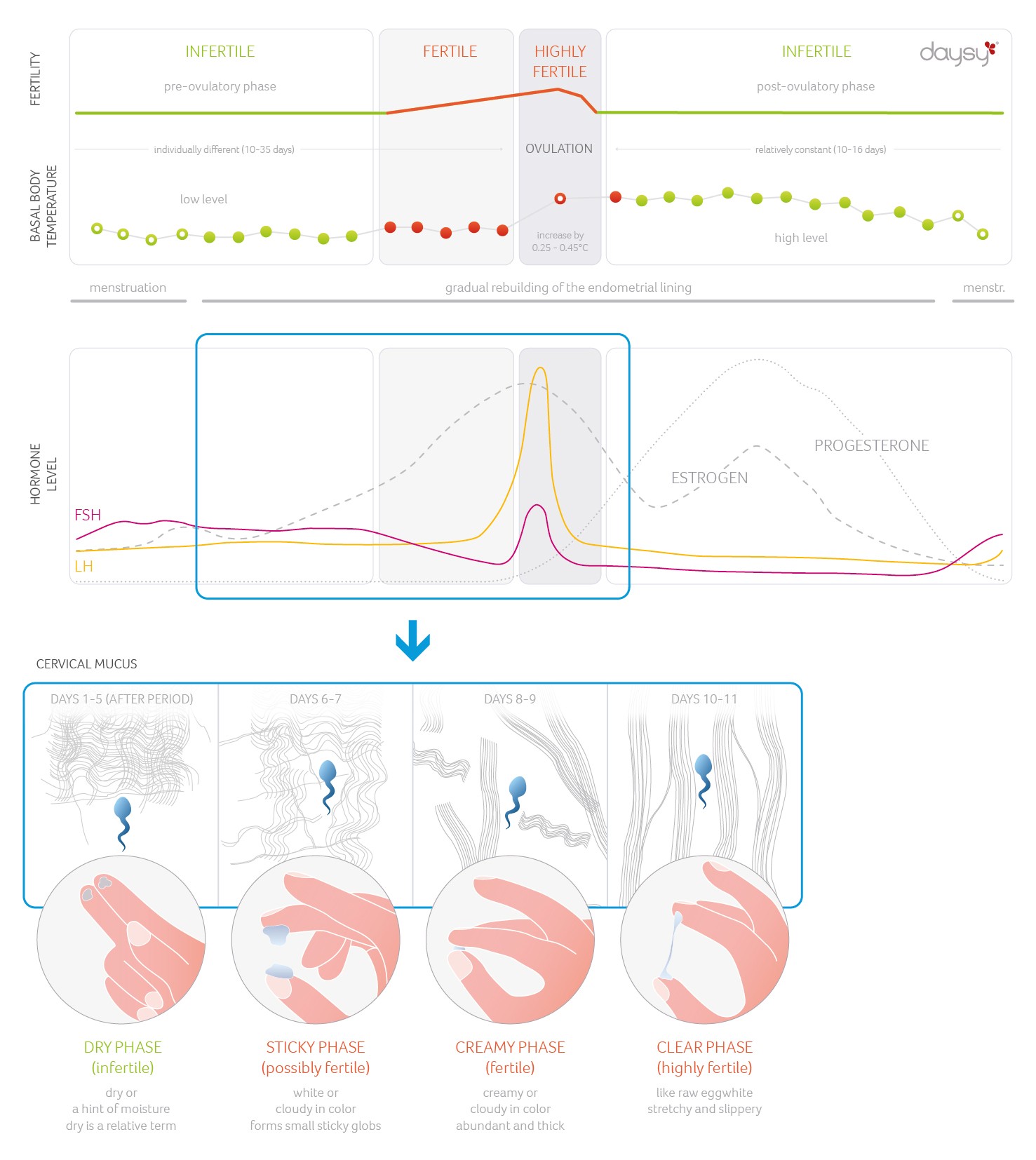 Glands at the base of the cervix usually produce this type of mucus after menstruation and after ovulation has taken place. Once menstrual bleeding stops, the cervix closes and a mucus that is impenetrable for sperm is blocking the way into the uterus. This type of mucus is usually not visible at the vaginal opening, hence there is little or no visible discharge, and the vagina feels somewhat dry. How long this phase lasts at the beginning of the cycle depends on the degree of ripeness of the regrowing follicles and whether their growth is affected by external influences, such as stress, a strict diet, extreme sports, etc., all of which can cause a delay in the process. While this phase may be skipped completely in very short cycles, wet and dry phases can alternate several times in very long cycles. Male sperm cannot withstand this acidic vaginal environment and thus survival is a maximum of 3 hours. 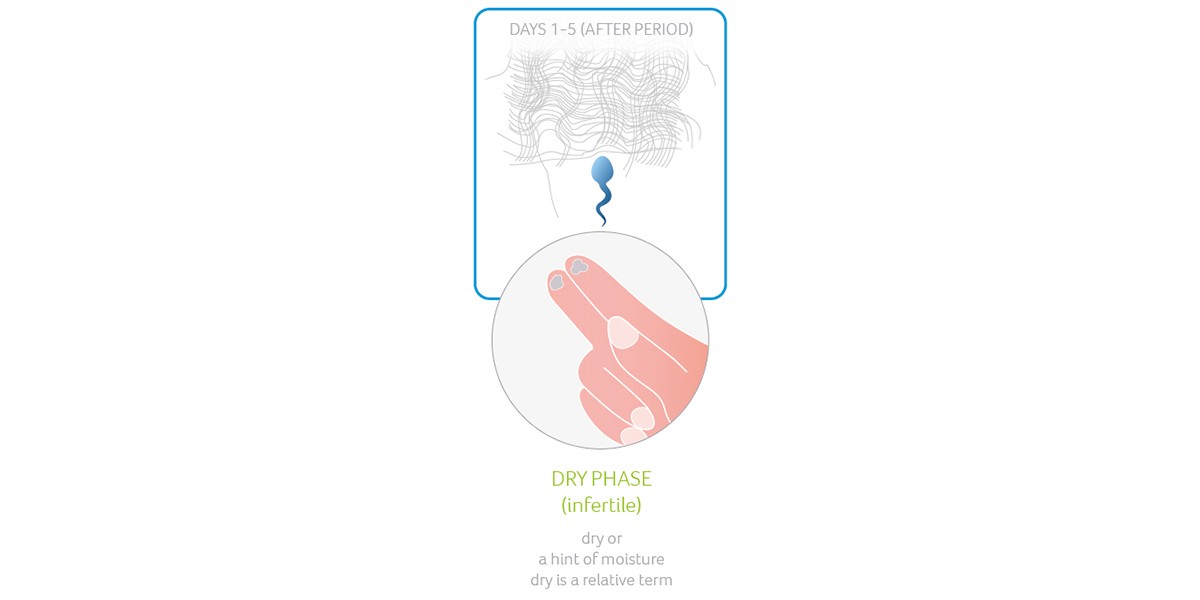 More and more oestrogen is produced inside the growing follicles and the hormone is passed through the bloodstream to, amongst other places, the brain and the cervix. Now the glands located a little higher up in the cervix produce sticky lumpy mucus that gradually becomes more fluid and creamy. The vagina becomes more moist and now you can see more traces of the cervical mucus at the vaginal opening. These are the first signs that you are entering your fertile phase. It is still difficult for the sperm to move rapidly, but they can now protect themselves from the acidic vaginal environment, even if only for a short time, thanks to the consistency of the mucus. 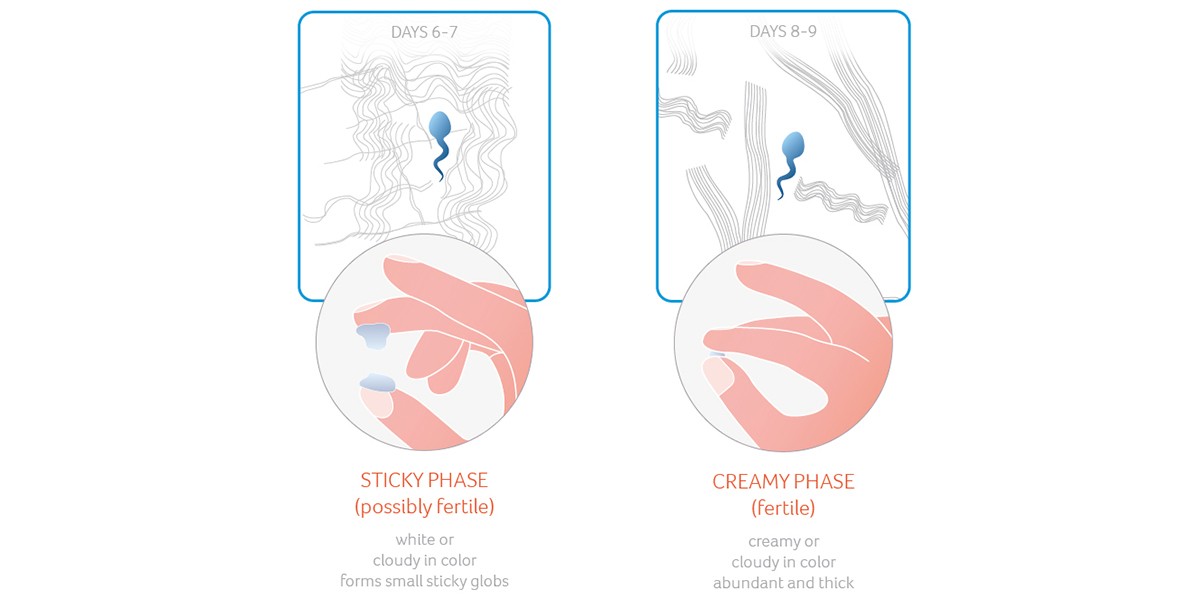 A few days before the follicle is ready to rupture and release a matured egg into the fallopian tube, the estrogen level rises sharply. The vaginal climate becomes moist, and the mucus is now produced in the glands in the upper area of the uterine canal. This estrogen mucus is stretchy and fluid, often even ‘spinnable,’ very similar to raw egg white or even more watery. This mucus protects, filters, nourishes and transports the sperm, and the sugar contained in it, luring them into the cervix. The sperm can survive here for 3 to a maximum of 5 days. This is now the best time to be intimate if you are planning for a baby. To make sure enough live sperm, which can ascend toward the fertilizable egg, is present at any time, it is recommended to be intimate every 2 days during this time. 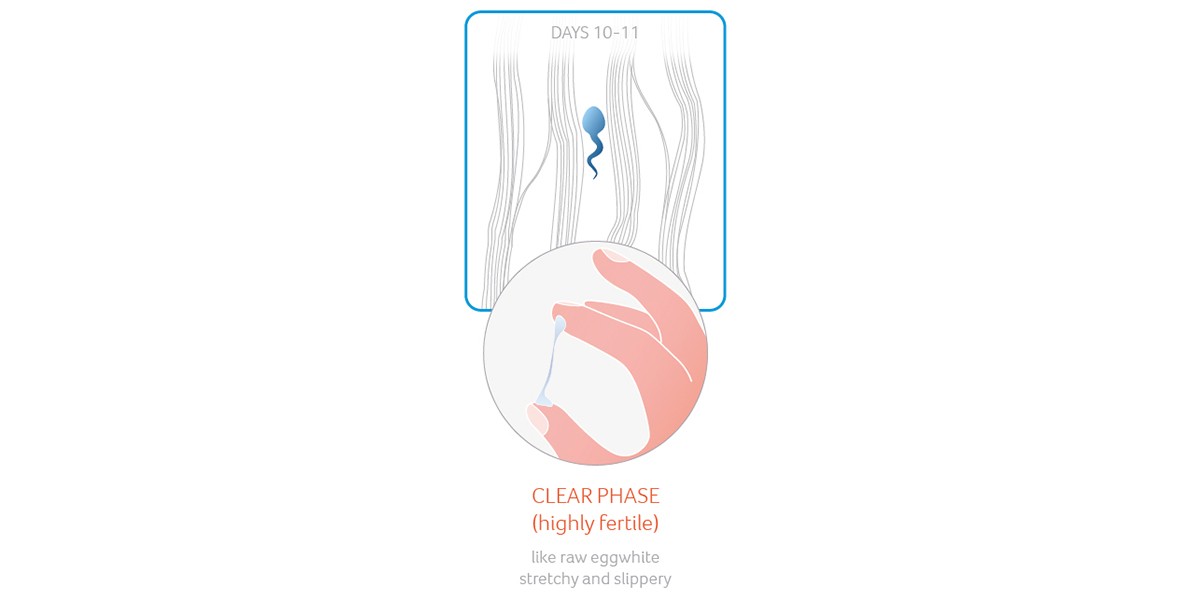 A gland that produces progesterone develops from the remaining follicle that ruptured and released the egg. This hormone then circulates throughout the body via the bloodstream. Basal body temperature increases measurably and the mucus, now being produced by the glands in the lower section of the cervix, becomes impermeable again, closing the cervix.

Differences in the cervical mucus pattern

It is important to note that various factors can influence cervical mucus quality, which can somewhat complicate its evaluation. Stress as well as sexual arousal can cause a temporary increase in vaginal discharge. The latter can even appear to be fertile mucus as seen before ovulation, when it is not. Furthermore, cough medicine, amongst other medications, can liquify the discharge, which should also not be confused with the fertile mucus quality. If you have fertile cervical mucus but no rise in temperature, it could be that you're not ovulating. While fertile quality cervical mucus can call attention that ovulation is coming, so you can time intercourse to conceive, it doesn't confirm that ovulation actually took place. It is only in combination with a rise in basal body temperature that it can be safely assumed that the mucus quality was actually caused by rising oestrogen levels, marking the beginning of the fertile phase.

In various forums, women share their experiences as to how cold remedies and asthma inhalers were found to have had an influence on their cervical mucus quality due to their decongestant effects. Unfortunately, no clinical study has been conducted to this day that supports or invalidates those claims.

Why does Daysy not use cervical mucus data for evaluation?

Cervical mucus is an important marker of female fertility for women who have been explicitly trained in observation. The nature of cervical mucus can be registered in the notes section in Daysy’s app DaysyDay, providing an additional tool for those planning pregnancy. However, seeing that cervical fluid is individual and different for each person, and given that our internal surveys have shown that even those who are trained are often unsure about the correct interpretation of their cervical mucus, the Daysy algorithm does not allow for these personal notes to be included in the fertility calculations.

Daysy is a device that is designed to be used independently without the need for additional education. Cervical fluid observation and analysis does however require training from a practitioner as it is individual and no one-fits-all rules can be applied.

Scientifically speaking, there is currently no standardized, reliable method to objectively observe and assess mucus quality - especially in view of the various factors that can affect the nature of the mucus for each individual. A number of medications have an influence on mucous membranes and even dehydration caused by a daily cup of coffee can change the consistency of cervical mucus and thus make interpretation more complex and less reliable.

We designed Daysy to be easily usable, without requiring  specialised training and thorough understanding of cervical mucus or the fine details of cycle analysis. We created Daysy to be straightforward and reliably applicable. We do encourage users to observe cervical mucus in combination with basal body temperature to further narrow down the fertile days.